Sunday morning.  Fourth of July.  Cloudy, cool, and quiet.  Just the sound of the ravens as they fight over food.  Sitting on my deck with a hot cup of coffee writing this just for you.

This isn’t going to be a “buy me” kind of newsletter but rather a “thought process” type of note as I write from the heart as the words come to me.

I had an experience last week that still sticks to me today as the Steller Jays flit through the air from tree to tree and the 4 bushy-tailed squirrels chase each other up and down the large oak in the back yard. 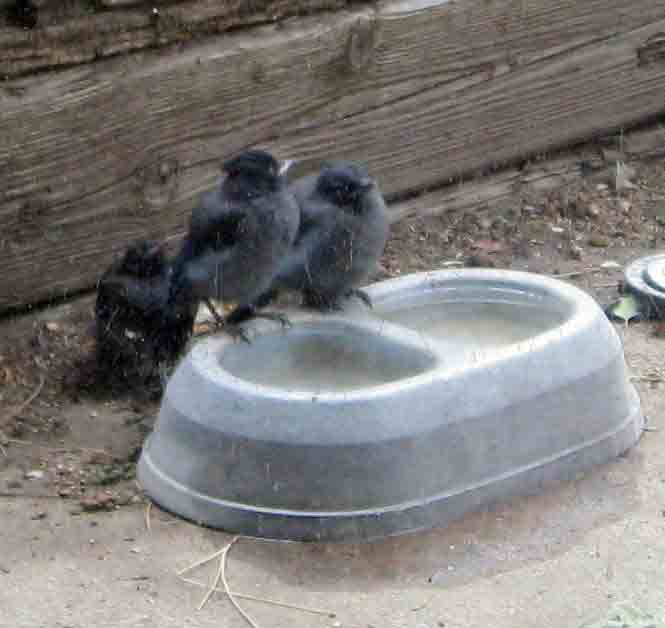 I woke up to see these three fluffy young birds enjoying my dog’s water dish outside my back door.  The birds drank, bathed in the water, and just sat there waiting for mama to come feed them.  If they got too hungry before she arrived, they squawked loudly and flapped their wings to tell her they were hungry.  She came and went and the birds enjoyed their new location outside the nest.  How and way they were there is something that I still haven’t figured out.

They stayed all day but hid in the bushes that evening.  The next morning, they were back but one of the birds seemed to be sick.  He was by himself sitting on the concrete right outside the glass door with his head tucked into his wing.  Mama bird came by and fed the other two but seemed to ignore him.  Finally he disappeared and I thought he was dead.

But the next morning, he was alone once again but was on the deck sill appearing to be sick. Several adult Jays were flying around the yard and appeared to be trying to help this poor bird.  The other two birds had developed the traditional blue tail feathers of a Steller Jay and were now able to fly.  They flew around on the rocks and fence in the bac yard and Mama would periodically come and feed them.  But the sick bird just sat there all alone.  Finally, that evening, I found him dead.

For several more days, the two birds, who by this time looked like smaller but full-grown Jays, returned to drink from the dog dish and to enjoy the back yard and dinner provided by mama.

Now they are gone and whenever I see a Steller Jay fly through the trees or land on a rock in my back yard, I wonder, “Are they the babies?”

This experience made me think of our industry and the companies that come and go.  They all begin as fledglings, still struggling to get off the ground, enjoying the exciting of a new adventure, unable to fly.  Some grow their adult feathers, flying short distances  as they are fed by all the free information in facebook groups,

blogs, and other information sources.  They venture out further and further, taking risks as they try out their new wings until they are finally able to soar with the flock.

Others, however, are afraid.  They want to fly but are unable to develop the adult feathers so necessary for flight.  They are stunted as they stand alone, away from the other birds, never taking advantage of all the resources available to them — until finally they give up their dream and let their business die.

And I ask you today, which one are you?

As I said when I began writing this, I’m not going to try to sell you anything.  This is a day for thought.  For thinking back to the days of the Revolution going on in our country during the late 1700s.  There was division as those who were anxious to fly and become a country where they could make their own laws and take their own chances were fought by the loyalists who wanted to remain risk-free but controlled by England.  On July 4th, 1776, a dedicated group of men who were risk-takers met and signed their Declaration of Independence.  But that was only the beginning.

There were many more risks to be taken and they were still in the middle of a war to determine if they really could be free.  Many died and families suffered as the war continued until they became a new country with the ability to soar and become one of the greatest nations on earth.

But even that was only the beginning as generations followed and the great Civil War once again divided us. Then there were other wars that threatened the ability to remain “the land of the free.”

This will be true of your business as well.  You may be at the beginning, still struggling to develop your wings and fly as a new strong business.  Or you may be past that stage and still taking the risks that are so much a part of business and life.  There are even some of you who are already soaring as a successful strong business .

But in order for our individual businesses and our industry as a whole to really soar as a powerful one, we need each other.  There are powerful businesses in our industry with deep pockets and then there are the rest of us with limited budgets who also want to soar.  We can struggle alone as we have been doing or we can unite into a powerful unit that works together, sharing, learning, and using what each of us does best.

So don’t just think of today as a “day of independence.”  Just as the day the patriots signed the Declaration of Independence, they were still in the midst of the war necessary to make the independence real and more risks and struggles would follow.  We, too, have to take more risks and experience struggles that we’ve never even considered.

Where will our individual business and our industry be in the next 10 years, 20 years, or even longer?

Perhaps I’m too naive and perhaps it is just wishful thinking that we willl pick up the gauntlet and work together to create a strong, powerful industry that only we can create.

But the gauntlet has been tossed to you.

2 thoughts on “Declaration of Industry Independence”