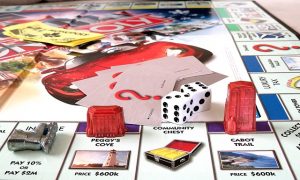 Ken Blanchard, author of “The One Minute Manager and other business books,”  told the story about the little boy who really wanted to beat his grandmother at Monopoly.  He studied.  He practiced.  He learned.   Until one day, he beat her at the game and told her, “Finally!  I beat you.”

She smiled as she picked up the pieces and put them back into the monopoly box.

She then told the child, “Yes, you did.  But let me tell you another lesson that I’ve learned about playing the game of life.  You can work hard, study, practice and become whatever kind of person you want to me.  But when the game of life is over, it all goes back into the box.  The only thing that’s left behind is what you’ve created or done for others.”

I’ve heard the phrase “You have to give to get,” and have also heard results of how people have been blessed as a direct result of what they have given to others.

But I have a different philosophy.  I don’t think you have to give to get.  I think you give, not because of what you will receive in return, but because your giving is from the heart.

There’s a country-western song that tells the tale about a young man who stopped to help an elderly lady stopped on the highway with a problem with her car.  The young man was broke but instead of taking payment for his help, he told the lady to “Pass it On!”  The song goes on to tell of a waitress, who was pregnant, tired, and discouraged.  An elderly lady left a $100 tip.  That night the waitress laid in bed beside the young man who had helped the elderly woman with her car and told him about the woman who had left the $100 tip.  And the song ends with the magical words of “Just Pass It On.”

I am a business coach for a County Business Empowerment Class in my community.  Last week, a local entrepreneur, who has become very successful, spoke about how he started his business hoping to make lots of money.  He said that he was in the business for the money–not just because it enables him to live well and do things he’s always wanted to do–but because he can use that money to help others as well.  I remember the author of “Everything I needed to Know About Life I learned in Kindergarden” say basically the same thing.

Successful entrepreneurs have to be interested in money if they hope to be successful.  You can’t just forget the financial parts of a business and operate it any way you feel like.  How you treat your customers, your investors, and even your vendors go a long way towards determining how financially successful you will be.

There are, of course, those like Ken Lay of Enron fame and Mr Matoff of Ponzi scheme fame, who cheat others to make their millions and then use it to live like kings.  Then there are those entrepreneurs who achieve their business goals while practicing the principal of “Pass It On!”

When the game of life is all over, and it all goes back into the box, the Ken Lays and Matoffs of the world will leave behind people who have been hurt or destroyed.

The “Pass It On” entrepreneurs will leave a legacy that may not even be known by most but will be appreciated and remembered by those they helped.

We are in the midst of changes in the world.  Changes bring opportunities.  What will you do with them?  Share your comments!

2 thoughts on “It All Goes Back Into The Box”